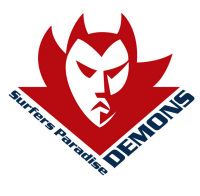 The Surfers Paradise Football Club is a football club based on the Gold Coast with a rich history of success and a highly respected brand and organisation within the Queensland football communities. With over 150 senior men and women and over 250 junior families at the football club, the culture and strong values continue to bring new people into the club on a year-to-year basis.

One of our most respected qualities is our club motto, being ‘One Family, One Vision, One Club’. From the senior men down to the Under 6s, we are all in this together and we all strive to make each other better both on and off the field.

Through our continuing growing numbers throughout the club, we have a vast array of professional contacts in a number of different industries. We assist any players who are relocating to the Gold Coast to play with the Demons in finding work that they personally believe with further their future career prospects. A number of our senior players have relocated from all over the country, including Brisbane, Victoria and South Australia.

For example, we recently recruited a player who was living in the Redlands area in Brisbane. He was playing in the 4th division in Queensland, but was looking to play in a more serious competition with the hope of one day being drafted into the AFL. When he came to us, he was a 7 foot ruckmen who had played for theTownsville Crocodiles in the NBL. We got him in contact with former AFL premiership winning ruckman Peter ‘Spida’ Everitt for personal, one-on-one sessions to further his skill set in the art of ruck-work, as well as all other skills in AFL football including kicking and hand-balling. On top of this, we had him in constant contact with the Southport Sharks throughout the year, and they have now expressed interest in signing him on a rookie contract. Outside of football, we set him up with working opportunities through a father of one of the senior players, and now has a full-time job as a painter and has fully relocated to the Gold Coast.

We aim to achieve something similar to this for any and all new players at the Surfers Paradise Football Club. While being a good player and enjoying your football is a fantastic added bonus to living in the great city of the Gold Coast, it is even more important to us as a club that all of our players are comfortable living in the area first and foremost, and we do all we possibly can as a community based, not-for profit organisation for our players and their families.

SENIORS PRE-SEASON has started! - however we accept new players all through the season. Very exciting time as we look to get back into some senior football before the Christmas break. If you are interested in moving to Gold Coast & start training with the Dees, get on board for season 2020!