History of the Club:
The Port Douglas AFL Football Club is relatively new compared to other Clubs downs south. Indeed next year the Mighty Crocs will be celebrating their 30th year of existence and already plans are underway for another successful year, both on and off the field.

The Crocs (with a lot of hard work) are enjoying a real golden period, with the Club having won Senior Premierships in 4 of the last five years, being 2014, 2016, 2017 and again this year, 2018. We are a quite unique AFL footy Club. We are the most northern Club on the Eastern side of Australia.

The Crocs compete in the AFL Cairns competition with a total of 7 sides, comprising Port Douglas and 6 other senior sides based within the Cairns city and suburbs. Port Douglas is a very small community with a permanent population of just 3,500, far smaller that the 160,000 of Cairns.

We pride ourselves on doing things outside of the football arena. Examples of this in 2018 is our fund raising and support for a number of local Cancer Foundations, our involvement with Dept of Main Roads and Transport through our driver fatigue program and have made considerable donations to our local hospital at Mossman.

Our recruitment strategy is firstly based on what a potential player can do (and behaviour) in our small community. Most of our recruits come from all over Southern Australia, including Tasmania, Melbourne metro, Geelong, Western Districts, Albury Wodonga, Goulburn Valley and Latrobe Valley and Darwin. If you have a big ego, you need to leave it down south as we are more interested in you as a person rather than playing ability.

We also pride ourselves on our junior development program and this year we saw no less than 13 'locals' represent both seniors and reserves. Our Senior Coach, Brad Cooper is arguably the best senior coach outside of the AFL, having now won 4 senior club premierships, 3 Qld Coach of the Year and has coached the annual North Qld V South Qld the past 2 seasons.

The feedback we often hear from players returning back home is that they have always left Port Douglas and far better players than when they arrived.

Player payments: Another thing that is unique to Port Douglas is that the Club does not have access to gaming venues and as such we pride the way we mange total player payments. We are very honest and transparent (per AFL Cairns rules) and clearly stick to our maximum of $60k player payments. Audited Club records show that we invested $51K and $52K in player payments the past 2 seasons. The BIGGEST thing to remember and understand is that if you are simply chasing $$$$, Port Douglas is not the Club for you. You don't have to be a mathematician to work out that 'on average' every single player would earn $131 per game. Sure some are on more coin and some are on less coin.  Please note, our Club does an extensive background of checks for all potential recruits. 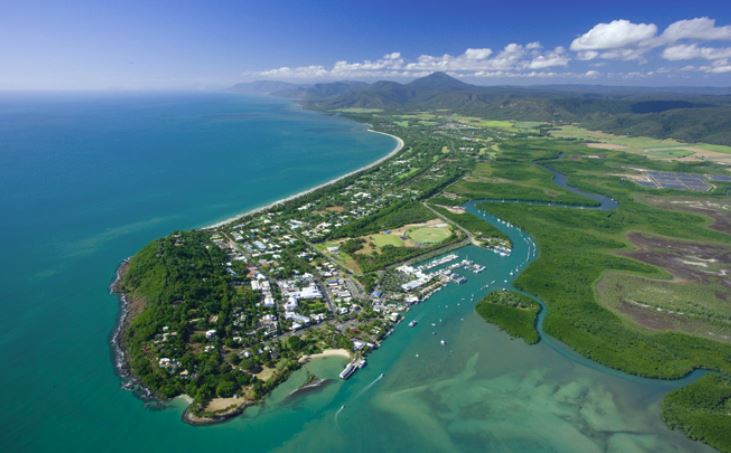 The Croc-Pit from the air

BUT WHAT WE OFFER IS A LIFESTYLE - In my 6 years of living in the Paradise and being involved with the footy Club, I can say that all players and their partners have obtained local employment and also assistance with sourcing accommodation.

Lifestyle Weather - Jan to March - very humid as wet season - never never cold. wear thongs all year round - this is when you need an air conditioner...... April to December - beautiful - minimum of 15 over night and max always 28 to 30 Never play or train in mud..... At our door steps we have Great Barrier Reef, heaps of fishing, scuba diving and snorkeling, just north the majestic Daintree National Park, if you are the hunter type, pig hunting is a favorite among players.

Job prospects - to be brutally honest, the wages up here are most likely not equivalent to say Melbourne. So if you are a tradie and earn $60 per hour down south, you may expect say $30 per hour here in Port Douglas. Our players are in a variety of fields, including different roles with Douglas Council, also we have quite a few plumbers, electricians and carpenters. Other roles include labouring, working on ground maintenance or pool cleaning. Also a lot of jobs in hospitality (as you would expect with Port Douglas in the Top 10 for Destinations in Australia).

Relocation assistance - Small assistance with relocation is possible. Accomodation options for players is helped by being sponsored by a real estate agent helps us get the heads up on any accommodation that suits players once they arrive here. Players usually arrive in 2 or more so it’s very easy to house them.

The Port Douglas Football Club operates under a professionally structured committee and football department that have as their mission statements the improvement of young men, both as footballers and as people.

The Crocs facilities are first-class and the experienced management/football departments focus on developing young men to become the best footballers and citizens they can be.